So… about a week ago one of my favorite musicians put out a new album, which I'd preordered from PledgeMusic so I could get lossless tracks of.

Now that I'm finally home from my trip I made a super fun discovery when I was trying to convert the FLAC files to Apple Lossless (ALAC) files so I could listen to them on my iPhone — the converted tracks wouldn't load over to my phone.

"Huh, this used to work…" as I proceeded to try to repeatedly shuffle the songs through xACT to see if switching them to AIFF then ALAC would work.

No options in xACT's GUI to change the sample rate.

Ok, time to google fu it up…

So I end up downloading a copy of XLD (http://tmkk.undo.jp/xld/index_e.html) which, in Preferences just like any good native Mac App, will let you set the sample rate.

After testing things... 48KHz is the highest sample rate my iPhone 6 running iOS 9 will take.

I have no idea if this will benefit anyone else, but I hope it does.

And with that, I am off to listen to a less lossy version of In the Cards by Robert DeLong than the version from the iTunes store. (But it's still an amazing album and you can find it on iTunes here)

Update: Screenshots of iTunes Store versus my home-brew versions: 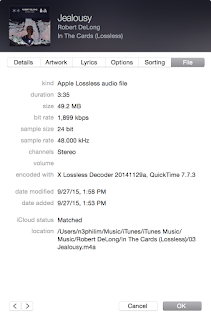 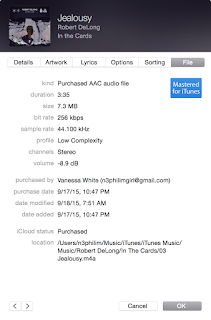 Posted by zamzummim at 2:02 PM No comments: